What are radio waves?

Applying an alternating current to an antenna causes its electrons to “vibrate” (i.e. oscillate) and emit waves of electromagnetic (EM) energy. The rate of oscillation determines the frequency of the radio wave.

EM energy is nearly everywhere around us, and it exists in various forms! Visible light, like radio frequency (RF), is a form of EM energy.

You may be familiar with fiber optic technology, which achieves data transmission by sending pulses of visible light through fine stands of glass contained within a cable.

Both visible light and radio transmissions can be used to transmit information across open space when physical connections (i.e. cables) are neither practical nor feasible.

Consider two ships in the night, each with a flashlight, transmitting messages using a series of patterns of visible light—in a similar fashion to Morse code.

However, such a system would be ineffective in daylight, or in the presence of any external light sources potentially interfering with the receiver’s ability to interpret each set of patterns clearly.

Conversely, radio transmissions are far less impacted by the environment, allowing signals to travel across great distances without a material medium, at any time of day!

Scores of scientific studies have researched the correlation between RF exposure and long-term health effects, finding no conclusive evidence that RF exposure contributes to the likelihood of diseases nor birth defects.

Radio waves carry relatively low energy, typically passing through objects as a result of their inability to interact with them.

MPE limits are defined to limit human exposure to RF energy fields. The FCC MPE occupational limit includes a safety margin, protecting workers with the potential for close proximity to radio transmitters. The MPE limit for general population exposure is far more stringent, as depicted in the graph below.

In compliance with the FCC, RF Emissions Reports are conducted by experts in Radio Frequency Safety Regulations to verify that power levels do not exceed applicable MPE limits, even when transmitting at full power.

Much like visible light, the energy carried by radio transmissions disperses very quickly, causing power to be concentrated only at the source.

Because of this, common household devices expose the general public to higher levels of RF than antennas installed on a tower. (See Graph Below)

Even when transmitting at full power—as in the case of a wide-scale emergency—RF exposure caused by LA-RICS antennas remains significantly lower than exposure levels resulting from cell phones, laptop computers and microwave ovens.

The chart below depicts RF exposure levels experienced by the general public on a day-to-day basis.

The grey limit line represents general population MPE limits set by the FCC, for frequencies within the 30 MHz and 800 MHz range. The line is marked to show where MPE limits exist at various LA-RICS frequency bands.

MAX at RHT assumes you are standing within 50 feet of the tower, when antennas are transmitting at full power during the case of an emergency. 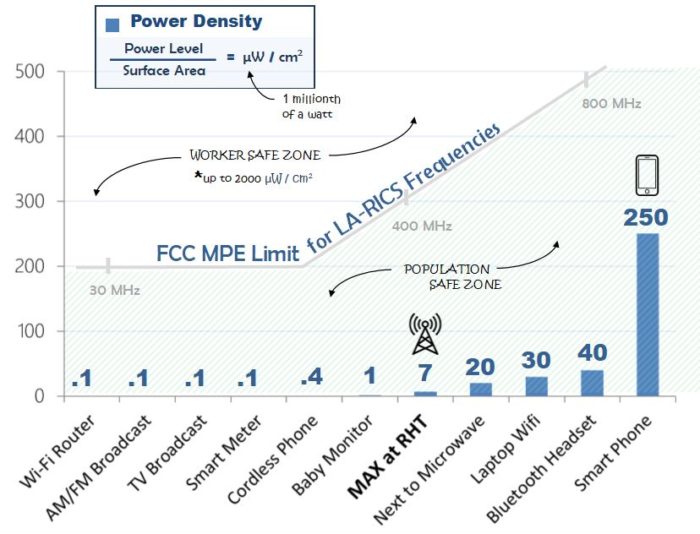